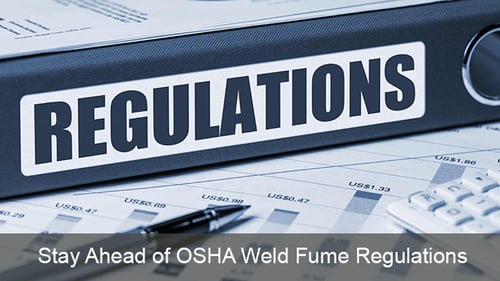 Introduction to Weld Fumes and Their Danger

Generally speaking, welding fumes are the toxic metal fumes created during welding operations. The permissible exposure of workers to these fumes is closely regulated given the negative health effects associated with them, and maintaining compliance with the various guidelines is extremely important for manufacturers who place an importance on their workers' health and mitigating organizational risk. Before we discuss the regulatory agencies, their standards and the related penalties, we should first understand what exactly weld fumes are.

The welding electrode itself is the source of approximately 85 percent of weld smoke. The particles contained in the smoke range from 0.1 micron (µ) to 5.0µ.To put the particle size in perspective, a large virus is 0.1µ while the diameter of a human hair is roughly 100µ. If you lined virus particles up from end to end, you would need more than 250,000 before you had an inch.

Despite the small size of weld fume particulate, quite a bit is created during welding processes. In fact, every pound of weld wire used creates somewhere between 25 and 50 million particles. To put that into perspective, for every 1,000 pounds of weld wire consumed (which isn't much for most manufacturers), 15 to 70 pounds of particulate is generated.

Aside from the fact that the millions of particles found in weld smoke are flammable they pose many serious risks to the health of workers. Exposure to the various toxic metals found in weld fume can result in a variety of potential side effects including those found in the chart below.

What are OSHA Regulations for Welding Fumes?

The Occupational Safety and Health Administration, commonly referred to as OSHA, is a federal organization within the Department of Labor tasked with ensuring “safe and healthy working condition for Americans by enforcing standards and providing workplace safety training.”

Under the OSHA General Duty Clause, each employer (regardless of industry or environment,) shall:

As it relates to the manufacturing industry and welding processes specifically, a number of OSHA regulations are in place to ensure employees can work in an environment free of the known hazards listed above such as 29 CFR 1910 Subpart Z for general industry or 29 CFR 1915 Subpart D and 29 CFR 1926 Subpart D for the shipbuilding and construction industries respectively. To enforce these regulations, OSHA has developed a series of Permissible Exposure Limits (PELs) to measure indoor air quality (IAQ).

For the five toxic elements listed side effects for above, PELs are:

It's important to note that OSHA PELs are the law, and failure to provide an environment where OSHA PELs are met can result in substantial penalties including fines. For instance, one plating company we are now familiar with was fined more than $340,000 in 2014 as a result of 38 violations including over-exposure to hexavalent chromium.

So, how can you avoid costly fines and protect your employees? The first step is measuring your IAQ. To understand that process, read our blog post The Importance of Measuring Indoor Air Quality. The second step is setting IAQ target levels.

In many cases, we recommend those limits set forth by the American Conference of Governmental Industrial Hygienists (ACGIH), which we will discuss in a bit more detail soon. Finally, once targets are set, the third step is to implement the proper weld fume capture systems and process controls to allow you to reach your targets.

The ACGIH is an organization dedicated to advancing occupational and environmental health. Where OSHA regulations are the law, ACGIH proposes guidelines, which, in many cases, are more stringent than what is proposed by OSHA. At times, ACGIH's recommendations have resulted in OSHA revising their PELs, so it is important to keep an eye on them.

For instance, ACGIH recommended a Manganese exposure limit 250 times lower than the current OSHA standard. Due to this update, it is predicted that OSHA could update their Manganese PEL to at least .2 mg/m3 (just 25 times higher than the ACGIH recommendation.)

It's important to note that the ACGIH measures exposure over a period of time to arrive at a Threshold Limit Value (TLV) over a Time-Weighted Average (TWA). This provides a measurement for the total allowable exposure a worker should experience for a given element over an 8-hour work period. For companies looking to exceed OSHA standards, provide the safest possible workplace and ensure OSHA compliance for years to come, ACGIH TLVs are a gold standard.

For the five toxic elements we've tracked, TLV-TWAs are:

This information was first shared in the RoboVent webinar Staying Ahead of Weld Fume Regulations. The complete webinar is available here.

To learn more about weld fumes, how they affect your IAQ and what you can do about them, make sure to watch RoboVent's 5-part webinar series on the subject available at robovent.com/category/webinars/.