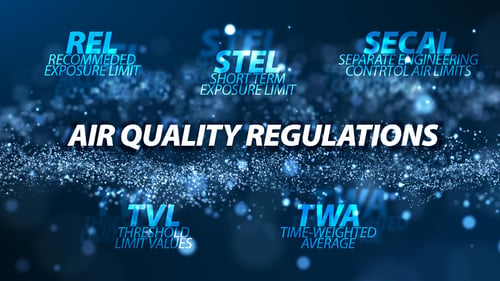 Indoor air quality (IAQ) standards can include some confusing language and acronyms. What's the difference between a PEL, an REL and a TLV? And which ones do you need to follow? Here's a handy guide to help you sort it all out.

Who Sets the Standards for Air Quality?

Other organizations, such as the National Institute of Occupational Safety and Health (NIOSH) and the American Conference of Government Industrial Hygienists (ACGIH), have their own air quality guidelines. Unlike OSHA standards, these are not legally binding.

NIOSH's recommended exposure limits (RELs) are considered to be authoritative federal guidelines that are used by OSHA and other government agencies to set federal standards and regulations. NIOSH sets its guidelines based solely on evidence of human harm. They are often lower—sometimes much lower—than the legally mandated exposure limits. That is because OSHA also takes technical feasibility and economic considerations for employers into account when setting the legal standard.

ACGIH also sets their recommendations based solely on human health impact. Their guidelines often call for lower limits than those set by OSHA. While not legally enforceable, ACGIH recommendations are often considered to be best practices to strive for both in the U.S. and internationally.

Air Quality Regulations and You

There are a few different regulations that U.S. manufacturers need to be aware of when it comes to air quality.

OSHA sets different standards for different types of industries. These are generally categorized as Shipyard, Construction, or General Industry. Most manufacturers and fabrication shops will need to follow the General Industry exposure limits.

Manufacturers should also be aware of any local air quality or industrial hygiene standards that may govern their actions in a particular state or locality. For example, California has set exposure limits for many substances that are lower than the federal OSHA PELs. When there are conflicting national and local air quality standards, manufacturers must follow the more stringent limit.

All of these different organizations have created a virtual alphabet soup of acronyms when it comes to air quality. Here are the ones manufacturers are most likely to be faced with.

Air Quality Standards and Guidelines for Selected Elements and Compounds